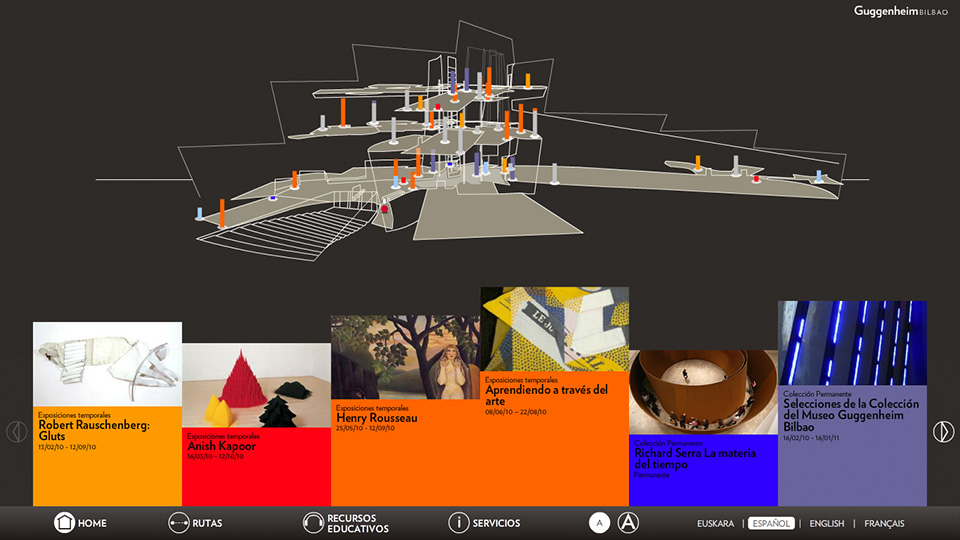 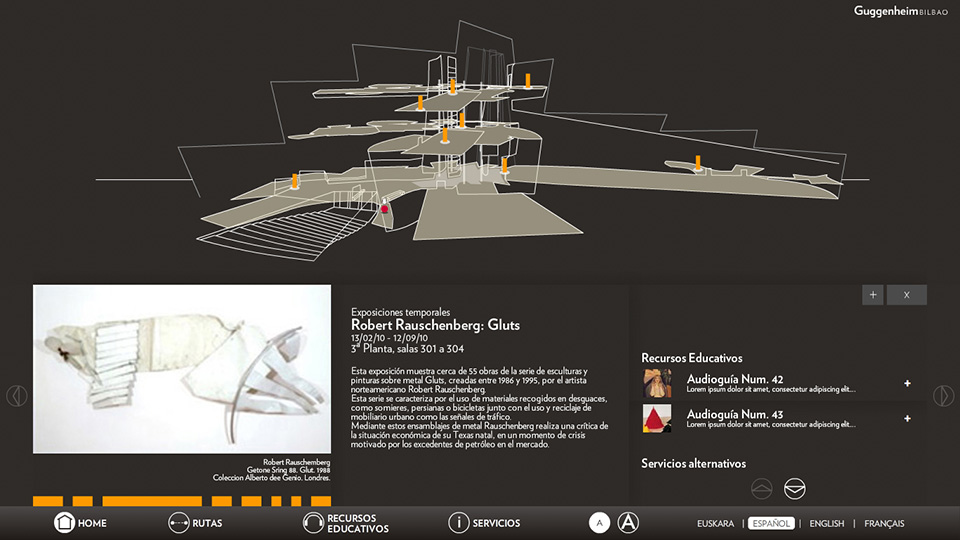 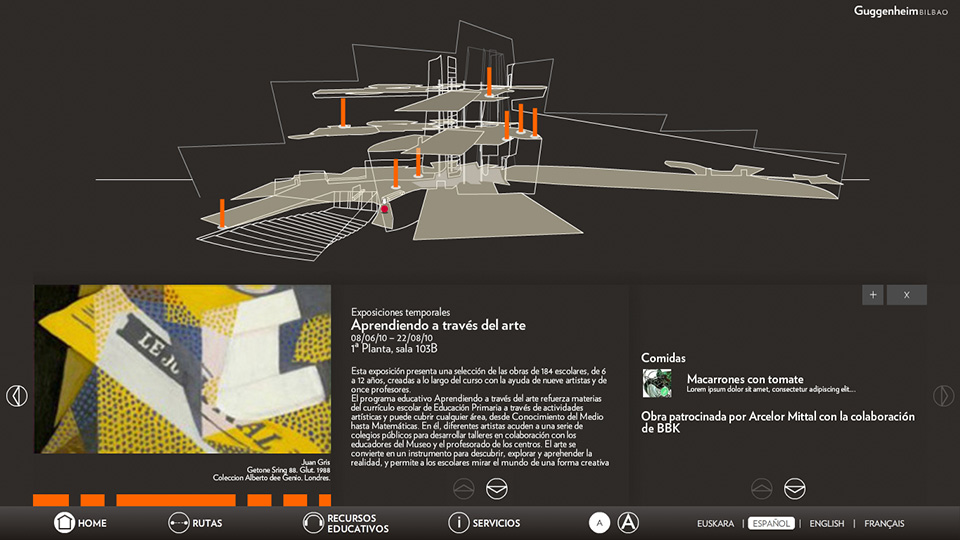 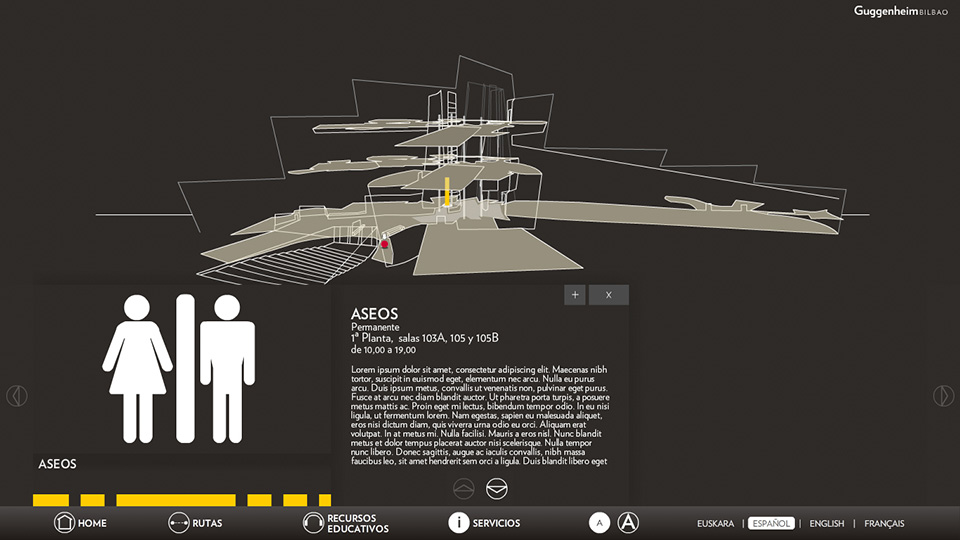 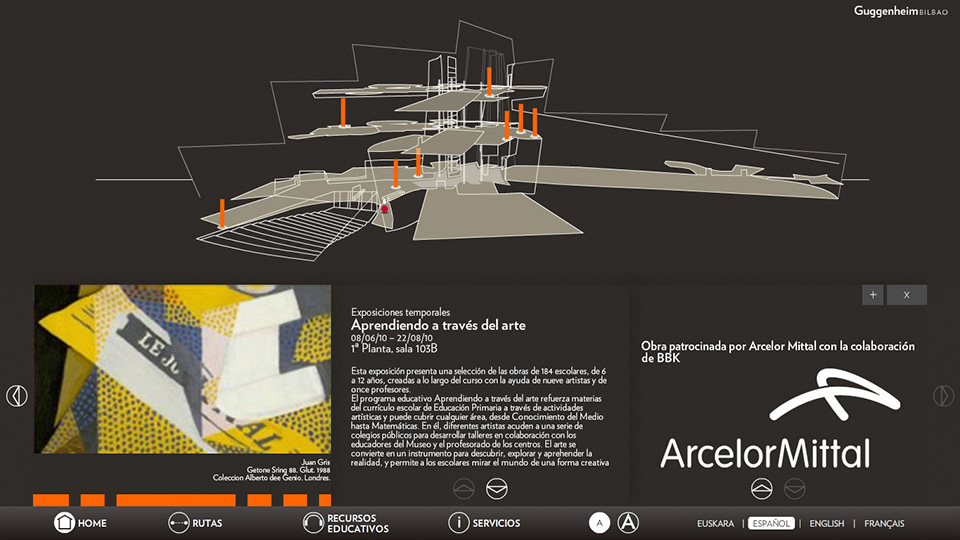 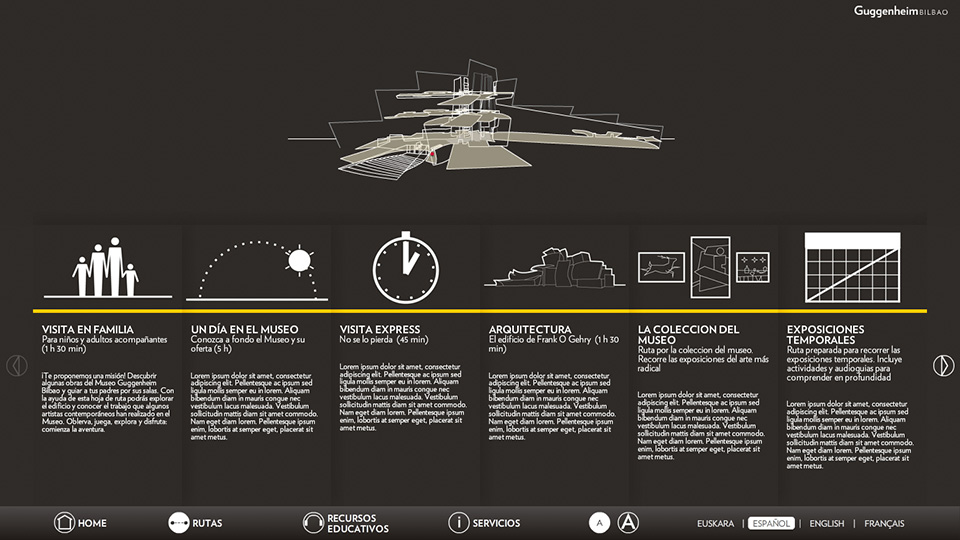 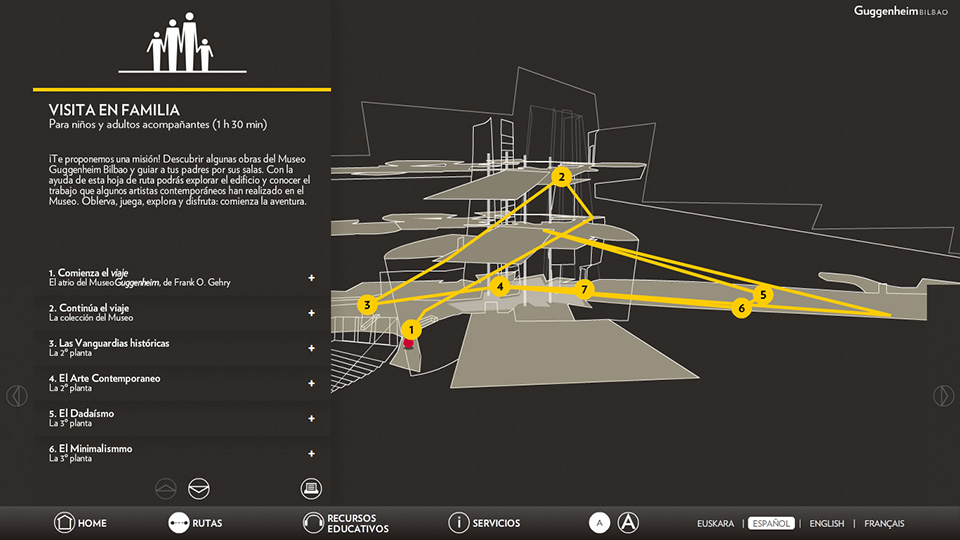 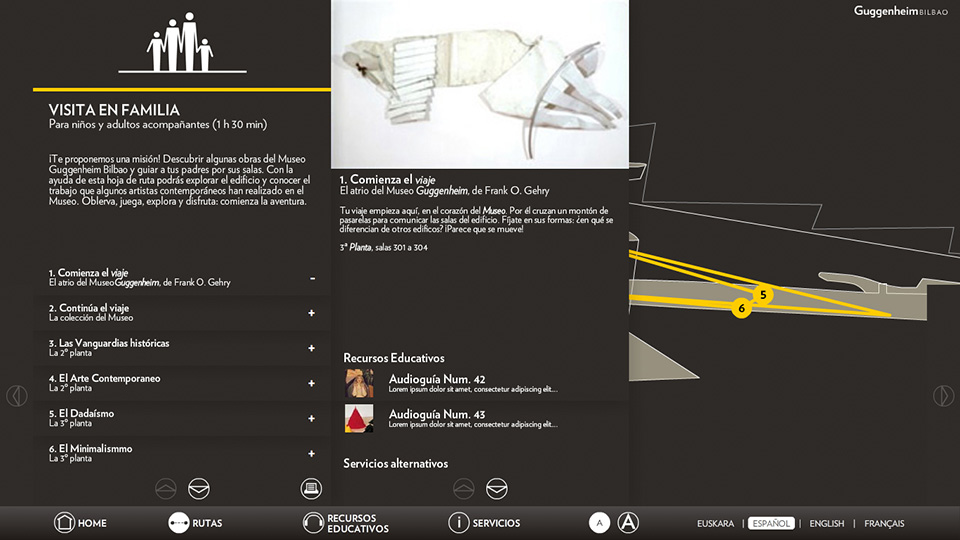 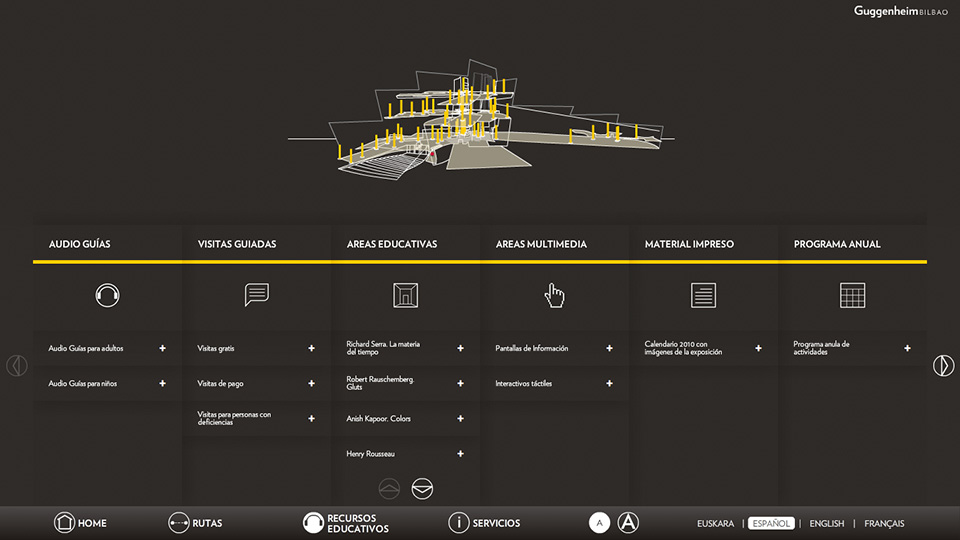 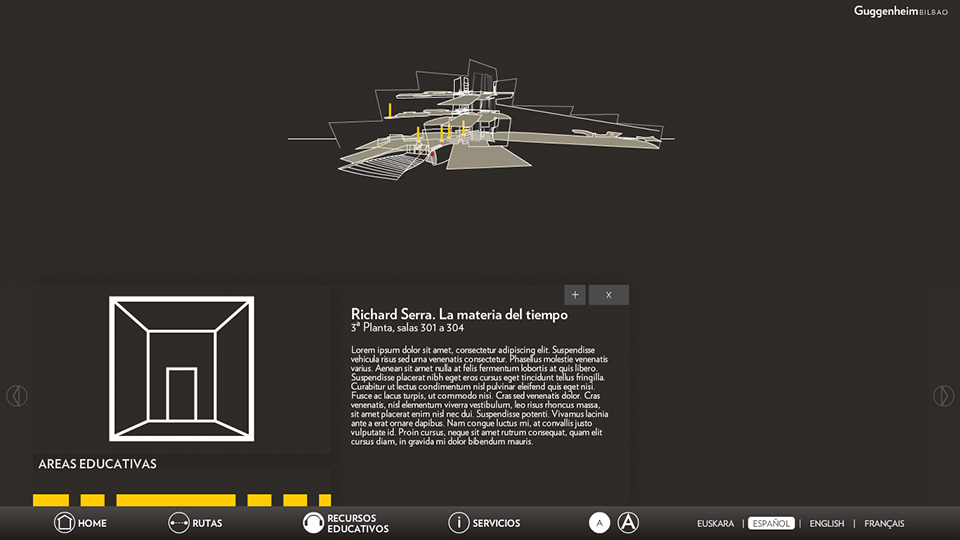 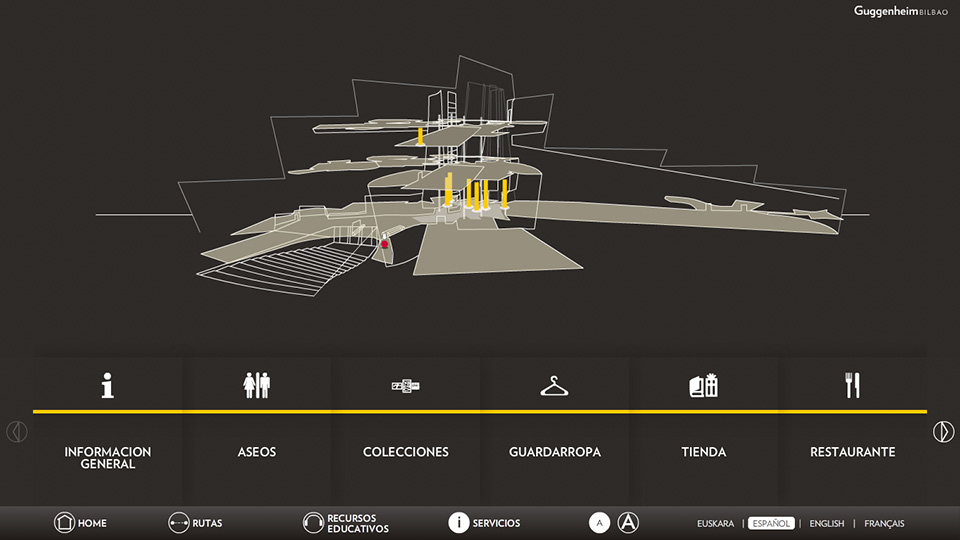 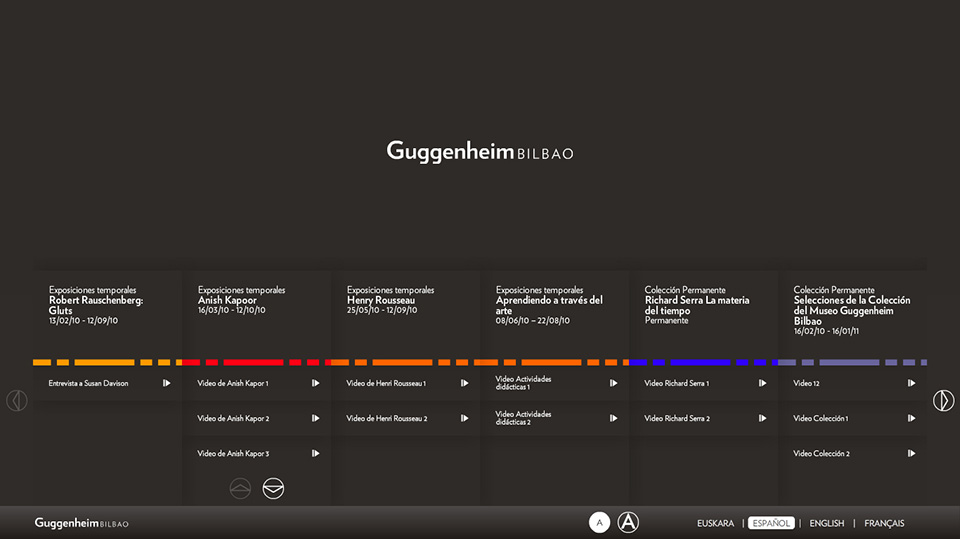 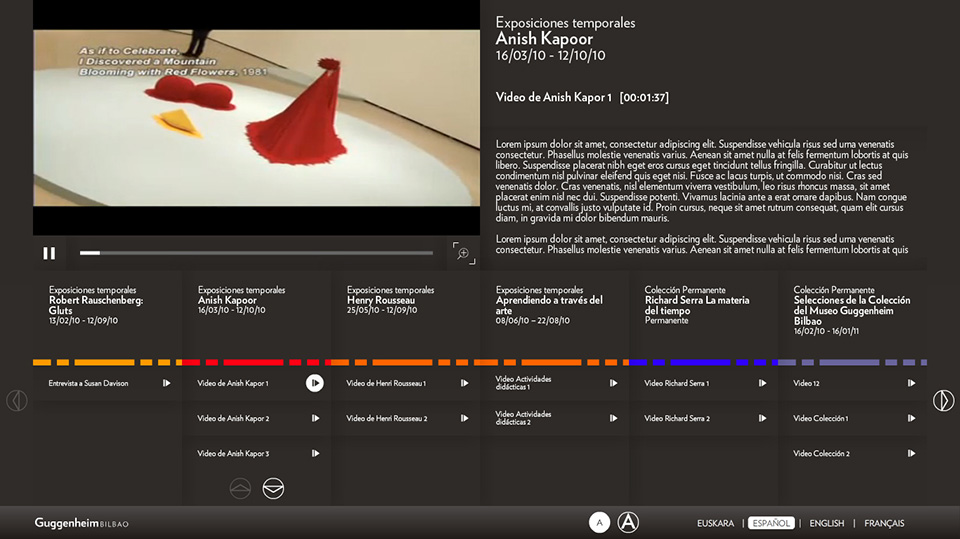 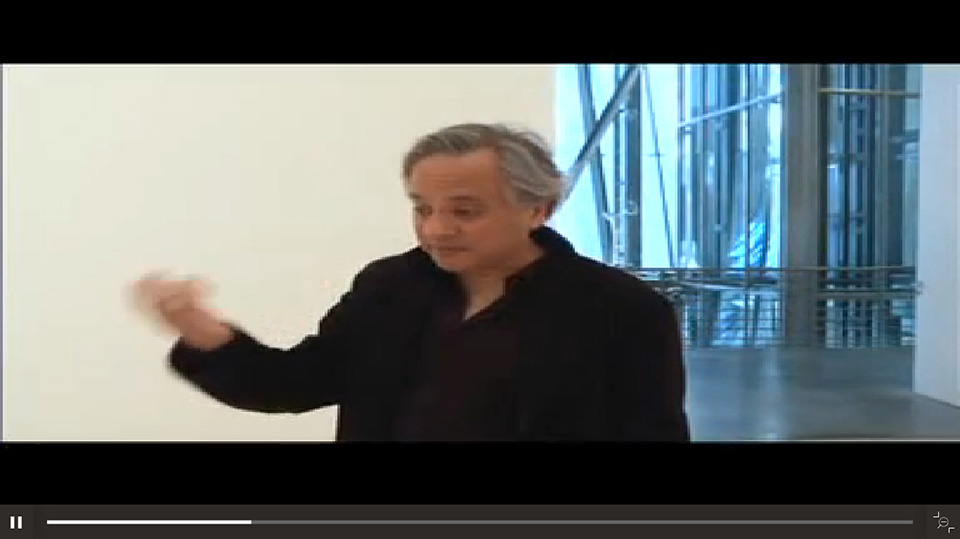 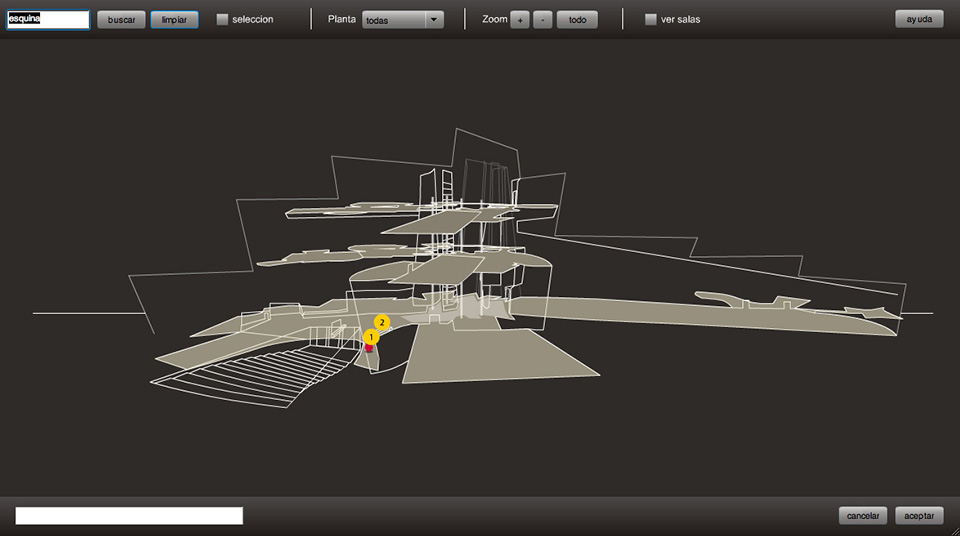 Control Panel for managing locations on Backend.
Search by keywords 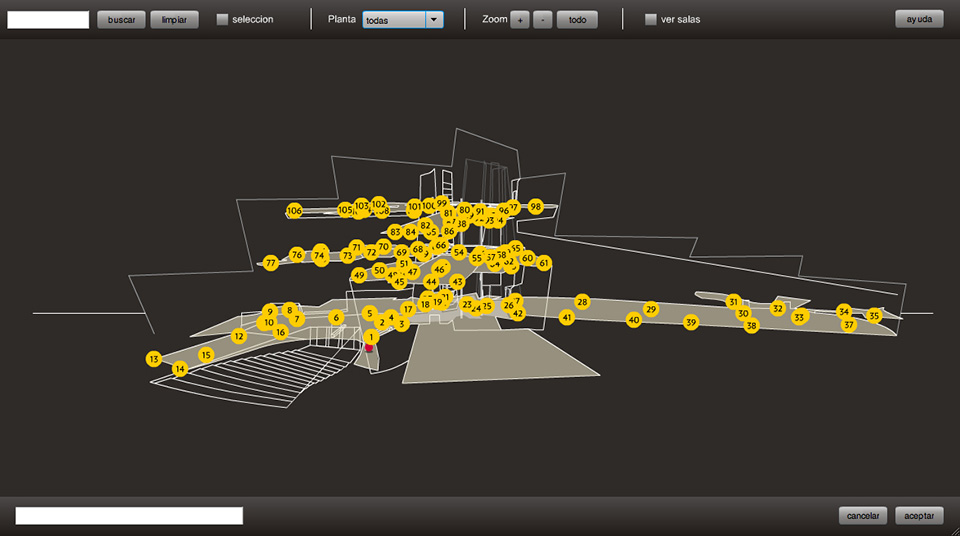 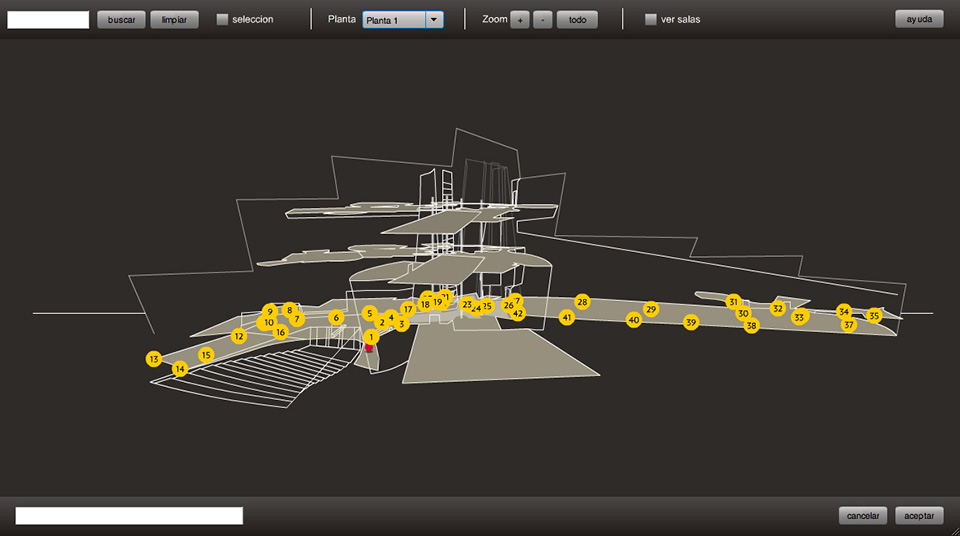 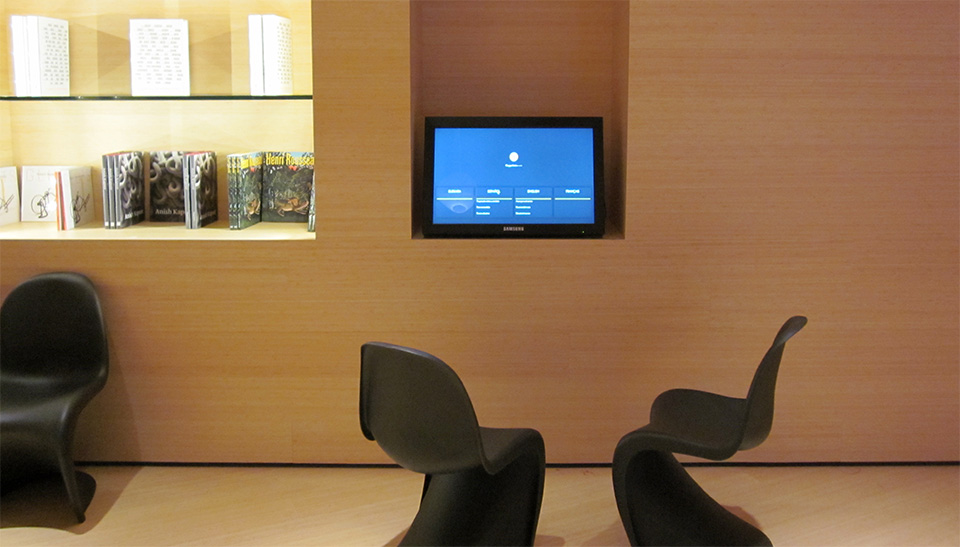 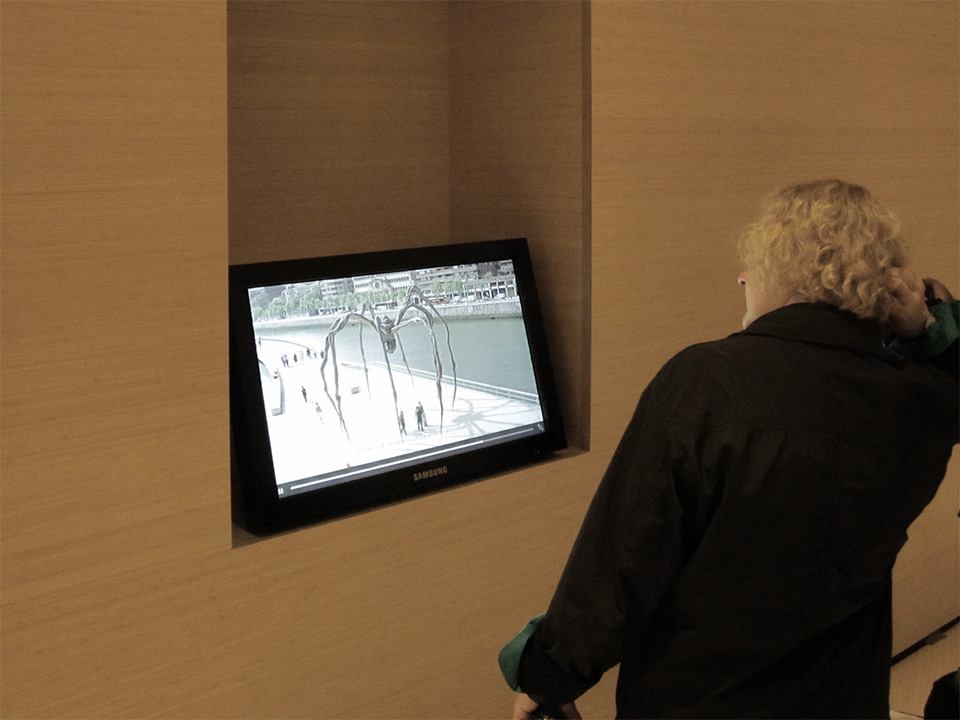 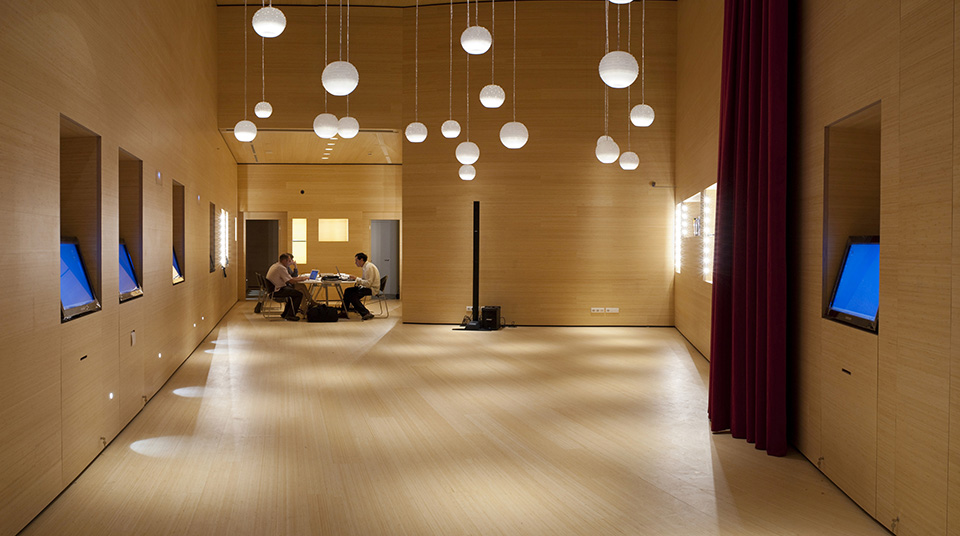 Visitors using the public computers in the hall 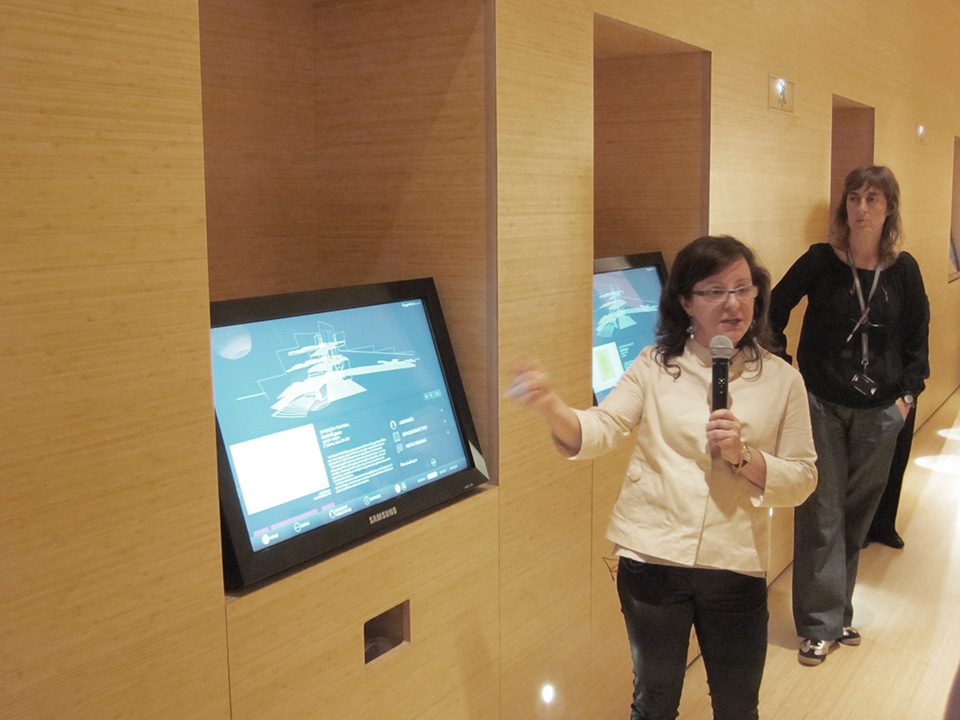 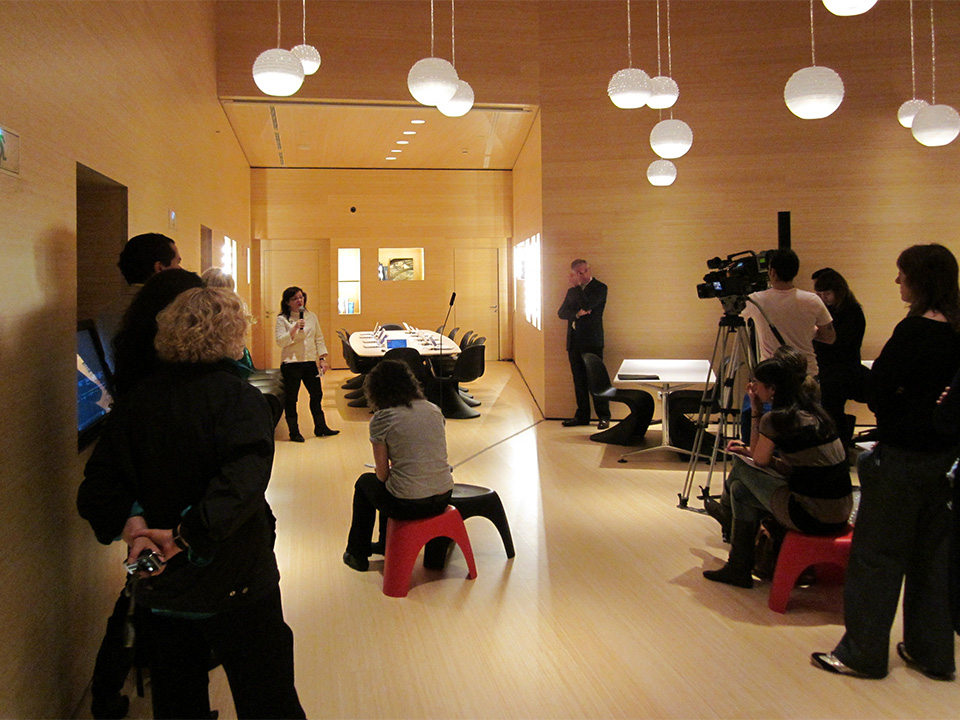 Zero Espazioa is the visitor orientation hall of the Guggenheim Bilbao Museum.

Information
Show the most recent events: Exhibitions, Museum Services, Predefined Routes and Educational Resources. Each element is displayed on a tab that shows complete information of each event, as well as relationships with other events. On a map of the Museum, the specific location of each event is shown, and can be completed with virtual visits.
The routes through the Museum are printable through a special continuous paper printer, so that the visitor can take it with him during his visit to the museum.

Basic level
Allows to watch a series of videos prepared by the Museum with interviews, comments, etc.

Videos
Displays 3 videos in high definition. Through a directional audio system the user listens perfectly to the videos without disturbing other users.

Tours
Under the artistic direction of the artist Maider López  this application was programmed allowing the visitor to draw the route he has taken on a map of the Museum. This tour is registered in the BackEnd and becomes part of the Database. The application also shows the routes made by other users by means of a statistical drawing, in which the most visited sections appear with a greater thickness. In this way both the Museum and the user have evidence of the most interesting places. After drawing the route, the system allows you to send this route to a friend.

Locations
Since several applications use a map system, Colorao develops an application, which integrated into the CMS allows defining, editing and deleting the different locations on the map.

The Application was developed in Basque, Spanish, English and French.

Have a look to the trailer made by Guggenheim Museum